While homeowners in some states across the southern United States  experience flooding and hurricanes, and the devastation that follows, those in northern states as well as Canada contend with extreme weather events during the winter months. Blizzards, heavy snowfalls and subzero temperatures can leave poorly insulated homes cold, prone to ice dams and experiencing higher than expected heating bills.  While there is plenty on the Icynene.com website to be said about understanding ice dams for the consumer, the following aims to cover some of the causes and solutions surrounding ice dams.

Ice dams are a common sign of poor roof performance. Ice dams are essentially ridges of ice and icicles created by meltwater that has refrozen on the eaves or a lower part of the roof. Although ice dams and the resulting icicles may seem pretty to look at and admire, they can be very dangerous not only to the homeowner trying to chip them away but to the home itself. Damage from ice dams can potentially result in hundreds or thousands of roof repairs.

An ice dam forms as warm air passes through gaps of the roof (usually due to poor insulation in between the ceiling of the living space and the attic or roof floor). This warm air causes the snow accumulating on the roof to melt.  The melted water then begins to run off the roof. As the melted water runs down the roof and reaches colder temperatures, it can re-freeze leading to a build-up of ice and a back-up of water.  This build-up creates the “dam”.  According to BuildingScience.com, as more snow melts, the meltwater can run under the ice layer due to gravity. At the roof edge and roof overhang, the deck tends to be much colder, and the drainage gap freezes solid causing the water to back up which is the point where damage to the home can amplify.

What kind of damage can ice dams do to a home or building?

The resulting damage due to ice dams forming can include water leakage into the building assembly, damage to the sheathing, roof structure, ceiling and walls as well as potential structural collapse due to the weight of the icicles. Furthermore, removal of icicles can also be incredibly dangerous for building occupants.

What are the main causes for ice dams forming?

As described earlier, the warm air that escapes through the roof is the primary cause of ice dams forming, however it is critical to understand why this warm air is escaping. According to an article written by John Straube of Building Science Corporation, causes for warm air escaping the roof can be the result of:

The lack of adequate insulation between the conditioned living space and the roof sheathing can allow an incredible amount of conditioned (i.e. warm) air to escape. Coincidentally, enough snow on the roof can also mean it acts as an insulator on the roof’s membrane thereby increasing its temperature to a sweet spot where the temperature is high enough to create meltwater but cold enough to ensure rapid freezing which then helps to create the ice dam and icicles.

The air leakage through the ceiling or from air ducts, plumbing stacks, recessed lighting or even chimneys into the space below the roof membrane (i.e. attic space) will increase the temperature of that space, which then melts the snow on the roof. It should be noted that while air leakage into this space contributes to ice dam formation, it can also cause condensation on the underside of the roof sheathing which can lead to wetting and decay of the sheathing and roof structure.

What is the best solution to combat ice dam formation?

As noted earlier, removal by chipping icicles and ice dams away with shovels or picks can be incredibly dangerous and can actually cause more damage to the roof sheathing.  An article by Joseph Lstiburek  from Building Science Corporation notes that building occupants have tried all sorts of quick fix solutions such as:

A water protection membrane is able to help limit the potential water damage caused by the ice dams, however, it is unable to completely prevent them from occurring.

Spray foam insulation addresses both causes of ice dams mentioned above – inadequate insulation and air leakage. Installation of spray foam insulation helps make it more unlikely that ice dams will occur since it is both an insulating and air sealing material. Applied on the underside of the roof deck and rim joists (unvented attic scenario) or the floor of the attic space (vented attic scenario), spray foam insulation is able to limit air loss to the exterior, keeping the conditioned air in the living space. SprayFoam.com suggests unvented attics are the most effective solution since they are enclosed, conditioned spaces while Building Science Corporation suggests strategies that stop excessive heat from flowing to the underside of a roof, removing excessive heat by ventilation and provide a waterproof roof membrane that will not leak under standing water.

Icynene’s Building Science team can work with architects and builders to better understand the best strategy to help reduce the risk of ice dam formation and allow your residential designs to perform efficiently and optimally. 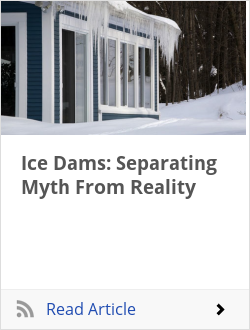 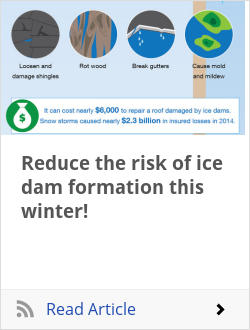 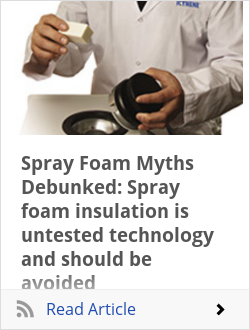